Holly had never been to The Big E before, but she dug right in.
Reminder Publications photo by Chris Maza

For veteran Big E attendees we know the drill: going to the fair means being able to try food we’ve never seen before and never imagined before.

Fair food is an art form located at the intersection of taste, novelty and mobility. A fair food item may be the best tasting treat you’ve ever had, but it has to have a degree of mobility so you can graze as you wander around the acres of fairgrounds.

For the past several years, the management of the Eastern States Exposition has invited the press to a preview of some of the new items and while it is always a good idea to attract coverage with free food – free alcohol is even better for reporters – I thought of a new angle for this year’s story.

What if I could find someone who is definitely a foodie but who hasn’t attended the Big E and who hasn’t been exposed to fair food? Enter my friend Holly, who hails from Florida and now lives in Hartford, CT. She has never been to New England’s great state fair and isn’t familiar with the kind of cuisine you’d find at it.

She enthusiastically volunteered for the assignment though, and we tackled the offerings together – in most cases.

The West Springfield Lions’ Club is offering “The Flatliner Burger,” a towering edifice of two burger patties with chili in between, a slice of cheese, French fries, cheese sauce, and bacon.

I was taken aback by the combination, but Holly dug in and gave it a hearty thumbs up. Members of the Lions Club said the combination represented ingredients they already serve at the food concession. One Lion said the new burger was “one stop shopping.”

Holly said it seemed to her as a spin on a chili dog and at the price of $10 she said she would buy it. I know she was sincere as later on she went back for more. 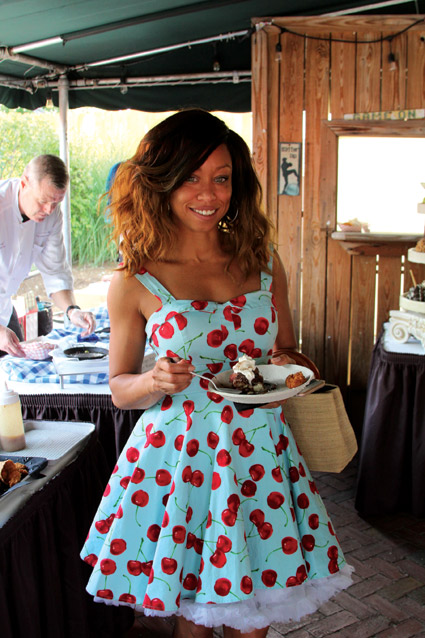 Next was the stuffed potato tots offered by Tots-A-Lot. By this time Reminder Publications Assistant Managing Editor Chris Maza had joined us as did ace WAMC reporter Paul Tuthill.

No one was really enthusiastic about the tater tots with sour cream, chives, cheese sauce and bacon bits, but wait a minute – the other item on their menu was an unanimous winner at our table.

For $8 they are offering the tater tots covered in chicken potpie filling with a side of cranberry sauce. Everyone loved it – in fact several of us said this could be a great meal to prepare at home.

Another home run was the Spencer Trappist Monks’ Reserve Ale (a Trappist Quadrupel), which will be available at the Spencer Trappist Beer Experience area in the Young Building. My colleague Maza is more trained in describing a beer than I am, but I will say it is a warm brown color with more flavor that many other American beers.

All of us loved it and I promised Holly I’d get her a six-pack for volunteering for this story.

The Bud and Burger Pub will be featuring the winner of a burger contest conducted by the Delaney House. The winner, a the Big Tast-E Burger has slices of pepperoni and a spiced catsup. We both ate and enjoyed it.

The Deep South Company gave us some of their Waffle Chicken Bites to try. Chicken and Waffles is an American staple and we were dubious at first about this variation. The bites of white meat chicken are dipped in waffle batter and deep fat fried. They were then drizzled with a maple-mustard sauce and for fair goers will be served in a waffle cone. The jazzed up chicken nuggets were quite good!

Coffee Break gave us a half portion of their Deep Fried Holy Cannoli to try. They take a pastry wrapper, rather than a standard canoli shell, fill it with canoli filling, seal it and fry it. They then add caramel sauce, chocolate sauce, powered sugar, cinnamon and whipped cream over it. Fair goers will have their portion served with vanilla ice cream.

I thought it was too sweet and a case of gilding the lily – aren’t canoli’s perfect as is? Holly liked it though.

The final tasting was gourmet candy apples by Carol’s Concessions. There was a verity of sweet toppings to a flawless tart apple. I chose a peanut butter covered one, which was then rolled in mini Reece’s Pieces. Holly and I gave it another thumbs up.

With the event winding to a close, I took a quick vote and out table affirmed its favorite was the Tots-A-Lot chicken pot pie tater tot combination.

The Big E opens Sept. 15 and the organization’s president Gene Cassidy told us his goal was to have 1.5 million visitors in 2017. There were 1.4 million people last year who made the pilgrimage to West Springfield and Cassidy hopes the weather will cooperate this year.

He noted that right now his staff was busy preparing the 2018 edition of the fair, which celebrated its centennial in 2016.